APPLICATIONS AND USES FOR EXPANDED PERLITE

The use of perlite in horticulture is perhaps its most well known application. Expanded perlite is widely used in bagged potting soils and in commercial greenhouses to condition and lighten grow media and retain water and nutrients. It is also used alone as a sterile, soilless grow media for hydroponics systems as well as rooting, propagation, and nuclear seed operations.

The long history of perlite use in horticulture is anchored in the following advantages:

1Expanded Perlite is Lightweight. A blend of horticultural perlite and peat moss, fully watered, weighs in at 40 lbs per cubic foot. Fully-watered soil tips the scales at 100 to 125 lbs.

2Long-Lasting Economy. Horticultural perlite is an expanded volcanic mineral. Unlike organic matter, like crop or forestry by-products, perlite will not deteriorate.

3Retains Water and Nutrients. Perlite will retain three to four times its weight in water, but will not swell and become soggy. The same physical nature that makes perlite good at water and nutrient retention also structurally conditions the planting mix to facilitate healthy air-exchange in the root zone.

4Chemically Inert. Horticultural perlite has an essentially neutral pH and will not noticeably change the alkalinity or acidity of a planting mix.

5Completely Sterile. By virtue of the super-heating expansion process, (1700°F), horticultural perlite is sterile—free of insects, weed seed and other soil-borne pests or diseases. Hence, it needs no steam sterilization or purifying chemical treatments.

6Safe and Easy to Use. Horticultural perlite is clean, odorless, easy to handle and free of anything toxic to plant growth. 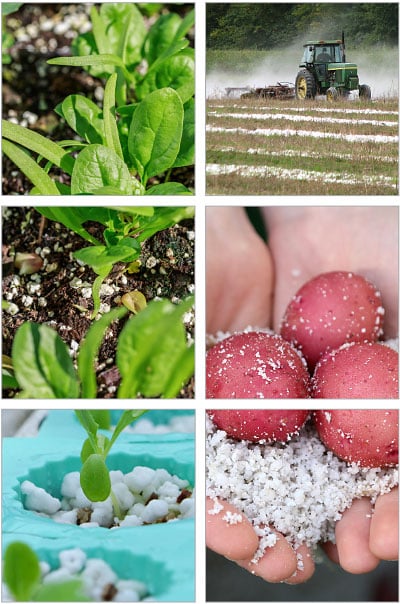 Perlite holds water one of three ways: on its bumpy exterior, in voids and surface crevices, and suspended in between the particles themselves. Fine perlite grades, packed more tightly, provide more surface area and more interspacial gaps, and are thus more absorbent and retentive—holding water and liquids more tightly. Quick draining applications use coarse perlite grades for faster release.

Common garden dirt—even a good topsoil—is just not good enough for successful container-growing. Top soil, once confined to a pot, is prone to compaction—meaning it won’t drain or breathe well. The result: plants grow poorly or not at all. Container soils—typically known as potting soils, though they contain no soil—are specifically engineered to do what putting dirt in a pot won’t: work within the unique strictures of a containerized environment to ensure proper drainage, moisture and nutrient retention, and adequate aeration for root-zone gas exchange.

Perlite has long been a part of the potting soil mix formulations and widely used in commercial potting soils—from the bags on the shelf at the local garden center to the potted vegetables and flowers purchased for home garden use. There are many products available in the marketplace designed to be perlite-like, but rarely check all the boxes perlite does when it comes to containerized growing.

Perlite is also used as the sole grow-media component in carefully designed, high-efficiency grow systems. Not only is horticultural perlite economical, easy to source, and easy to use, of critical importance to fine-tuned grow systems is that straight-perlite media can be grade selected, even grade-blended, to meet the unique aeration, drainage, and nutrient requirements of both the commercial crop and the demands of the grower’s system/physical setup.

Here’s the key: perlite gradation (particle size) affects water-holding capacity—meaning the amount of water taken up and held is directly related to the size (grade) of the perlite media. Smaller, finer, more densely-packed particles hold more moisture than coarse, loose particles. That provides the grower with a level of control necessary to improve in crop yield and system efficiencies. You can’t get that level of media-size control with other common hydroponic media—rockwool, ag or forestry by-products (coir, bark), or expanded clays pellets.

An example of this perlite-media-meets-system-design balance was published by the Perlite Institute (Snapdragon Production in Perlite), and details a regional flower grower (Flowers by Bauers) who, faced with an increase in demand for their hydroponic-grown snapdragons, updated their methods, tech, and perlite grade choice to increase yield and decrease input cost.

All the pro-grow advantages of perlite as a potting soil component come into play for using straight perlite as a grow media. For example—perlite’s moisture retention and release capacity. In systems where the plant containers rest in a shallow reservoir of nutrient-enhanced water, the excellent capillary character of perlite wicks water up, holds it for plant use, and, because perlite will not water-log or become soggy, still maintains critical air-exchange space in the root zone.

Another example—the sterile, pH neutral character of expanded perlite. After the University of Idaho’s Seed Potato Program lost an entire greenhouse crop of valuable nuclear seed potatoes (minitubers) to a soil pathogen—the crop was being grown in steam-treated peat moss—they replanted in pots of sterile perlite to great success. Not only did they avoid another seed crop loss, they were extremely pleased with the production speed, yield, and vitality of the resulting seed. Going forward, they report that the combination of an ebb and flow sub-irrigation hydroponics system and perlite media ideal nutritional and soil/media temperature control, resulting in increased yields, a decrease in cropping time and more minituber (seed) production.

Setups great for perlite include common plastic containers, fabric pots, and net cups. DWC, dutch buckets, ebb and flow, and drip systems all work well with perlite. Another advantage of perlite beyond versatility, performance, and predictability: straight perlite grow media can be reused if kept free of disease and protected from solids loading.

The Role of Perlite in Hydroponic Culture

The Water-Holding Capacity of Perlite

The functional value that horticultural perlite brings to commercial plant propagation and off-the-shelf potting soil blends is also available to gardeners and landscapers who must work with native soils. Conditioning and improving poor native soil performance with perlite provides the following advantages:

Improve the physical profile of the soil for the long-term. Heavy clay soils tend to compact, tightening or eliminating the critical pore spaces between soil particles that are absolutely vital to healthy root systems. Repeated tilling is necessary to re-open the soil and provide a friable root zone that allows roots to easily penetrate, permit water in, drain excess water through, and facilitate vital gas exchange. That can work in a vegetable garden that is replanted every growth cycle, but frequent tilling is not an option for flower beds, vine-crops, turf, and other long-term landscaping areas. And simply adding compost during construction of the landscaping project isn’t the long-term answer either. Yes, a quality compost certainly helps amend the physical structure of heavy soils—until it doesn’t. After two or three years in the soil, the organic roughage that was physically conditioning the soil is consumed and the soil reverts to its tight, inhospitable profile. Better to blend a liberal dose of inorganic perlite into the soil along with the short-lived compost. Compost provides the nutritional jumpstart, perlite the long-term soil structure improvement (perlite will not decompose over time) and the soil profile is now ideal to support a healthy, thriving landscape or turf field going forward.

Improve water and nutrient retention. The light, frothy surface of an expanded perlite particle readily grabs and holds moisture and nutrients. Mix it into the native soil and the perlite also facilitates moisture retention in the surrounding soil particles by virtue of the now opened, more friable physical structure of the soil. In cases of heavy rainfall, having perlite in the soil means drainage is dramatically improved.

Additional points. Perlite is pH neutral, sterile and free of weed seeds and disease, odorless, lightweight and safe to handle. Perlite also works as an insulator in the soil, working to buffer extreme fluctuation in soil temperature.

Perlite for Lawns and Gardens

Roof Gardens and Other Engineered Soils

The ultralight aspect of horticultural perlite really shines in applications like roof gardens and structure-supported landscaping, where weight on the structure is a key consideration, especially when retrofitting existing structures with green roof systems. Vegetative roof systems fill many functions—welcoming and relaxing outdoor spaces for building occupants, food production, mitigating the heat-island effect of building’s roof system, even storm water surge control and filtration of discharge.

Other engineered-soil structures that clean and mitigate stormwater events—bioswales, ecology embankments and biofiltration wetlands—also benefit greatly from perlite in the soil mix design. While weight may not be a factor in these in-ground constructs, the other advantages of perlite—especially its aggressive filtration properties, non-organic permanence, and drainage rates—certainly are. Such structures are often held together by vegetative covers, and perlite provides the enduring moisture retention and physical soil structure profile required for healthy cover.

Perlite Solutions for the Green Building Industry: Initiatives and certifications

Roof Gardens that are Gentle on the Roof

Gardens in the Sky: Growing Food on Rooftops